A tiny neighborhood surrounds an intersection of 63rd Street and Niwot Road a little ways northeast of Boulder, Colorado.

It is a lovely neighborhood with nice people who like to live near the country, and away from the city. Most of them love children as evidenced by the things done especially for them.

Another example is a place that created an entire playground! What child would not want to play on their own swing-set or experience imaginative stories on a train, or sit in their own family’s teepee and ponder what it was like before American civilization arrived in this part of the country?

Well, maybe the playground would merely define an area where the children felt safe and could play without contemplating any of those possibilities in a carefree environment.

From here, 63rd Street heads north for 3.5 miles where it intersects and stops at Nelson Road.  There is something special about that little stretch.  May I share with you some of its more obvious features?    To begin, as 63rd leaves the neighborhood, it crosses Left Hand Creek.

Pretty dry right now.  But maybe you’ll enjoy it during the spring runoffs in the mountains in late spring.  It looks different then!   And, just so you know, there is water flowing there right now, it was just such a trickle it couldn’t be seen from this angle. Some things change, like this creek; some things do not, like this tiny lane! 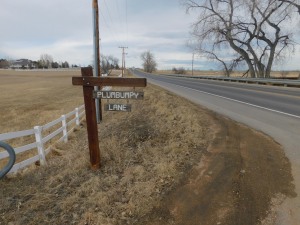 See how quickly the land changes as you leave the neighborhood?  This IS the edge of the country in this area.  Family homes remain, but they become further apart as the land is revered for it’s richness, wealth, and beauty.  As one travels north, one can see other sights.

Like a flock of geese standing in an icy pond.  Or, maybe cows in pasture. 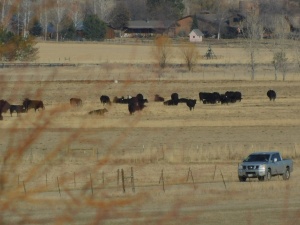 To be fair, there are hogs and sheep too.

Or maybe you’ll see a rooster and some different animals on the same farm! 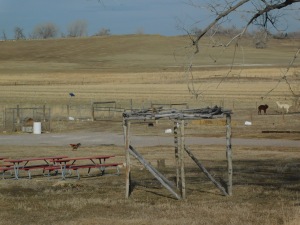 Thanks goes to Red Wagon Farm for the opportunity to see life right there!  Thank You!  and Thanks to your dog who exhausted himself barking at me and finally laid down to enjoy the sun!   :^)

The picture of the sheep hints at another sight one may see along the 63rd.  Like, Haystack Hill (tall one on the right) and Sugarloaf Mountain (the distant one on the left)!

Or a storm brewing, and hiding, behind some higher mountains behind Haystack Hill. 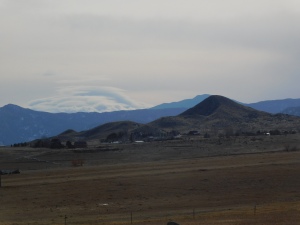 You can catch such a view up by Boulder Hills where Plateau Rd leaves no outlet! :^)

How about the mountains that are actually called the “Foot Hills” with a long abandoned NASA radio tracking site?  Behind them, one’s view of Gold Hill is obscured the tiny hill just beyond the plateau. 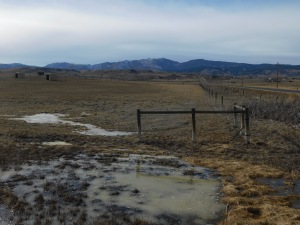 Yes, there are still pockets of ice in places, remnants of the last storm that blew through a few days before!  But maybe you can’t see the dishes very well.  How about a closer shot with more detail on the dishes? 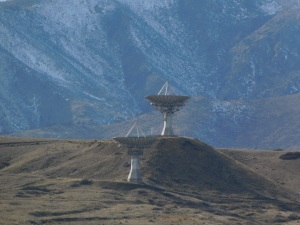 These are two 30 meter dishes that became unnecessary when the TDRS satellites were installed and operational in orbit.  For a while, they were used for amateur deep space signal listening.  But I haven’t been up there for years now!

Lagerman Reservoir can be seen even from the road.  It has a hiking path which is sometimes closed during times when raptors are nesting.

And on the left, you can see the little picnic shelter of the park and wildlife area that now surrounds the lake.

Of course, it wasn’t always like this.  As a matter of fact, this was just a low pasture until Swedish immigrants built the reservoir over a hundred years ago.  A hint of what I’m talking about is just up the road from where the picture above was taken.

Ahead on the right is Swedish Evangelical Lutheran Church of Ryssby.   I love to see it and stopped there yesterday to just take it all in.  I stayed out of the churchyard because I wanted all these pictures to be from the road.  But take a look at what one might see just a short ways up the road! 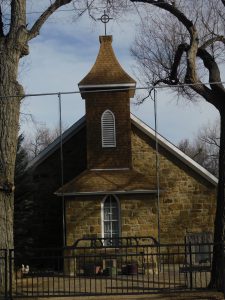 See the intricate ironwork with the name Ryssby on the gate?  Ryssby is a town in Sweden. People around that time came here in the 19th century, long before there was anything else that you’ve seen so far even existed.  Well, except for the mountains!  They’ve been here a VERY long time in comparison.  Can you see the plaque on the ground in front of the church where the pots are?  Let me cross the road and zoom in a little!

Cool!   Here’s some of the story of how this church got there and maybe some eye candy so you can see a little of it.  A small poster tells the story. 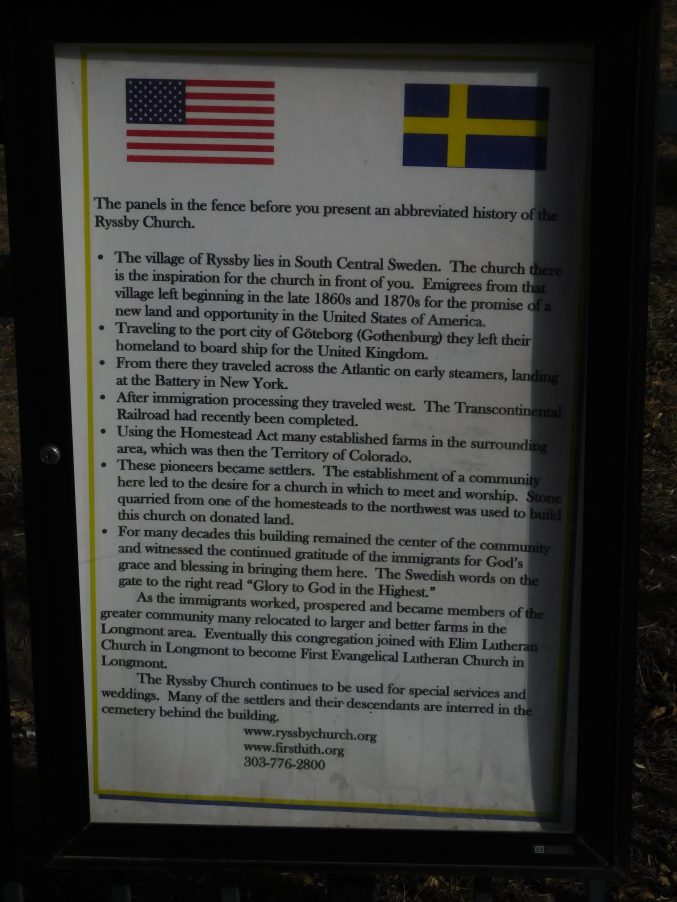 This is a little plaque in a stone that was planted there in the churchyard in 1933.

So, it has been here a while!  Not like the mountains, but what a beautiful building on a small hill, overlooking a reservoir!

Yes!   That IS Lagerman Reservoir in the distance on the right!

Here is a small gate that you can use to go look at the cemetery behind the church. You can also see the south side of the rock structure that is the Ryssby Church!   And if you are REALLY keen and read all the above explanations in the picture, it tells you what the inscription actually says, translated into English.

Shall we walk down and see the ironwork shadowed into the fence?  I thought it was beautiful.

At first, I wasn’t sure why they picked the pictures they wove into the fence.  Here is an old steam engine pulling a passenger car.

And a large ocean going schooner adapted to steam power.

Here, it appears they were transferring to or from a large ship.

This panel looks to me like it was during the time they were building the church behind.  Can you see the horse and the man working on the building itself? 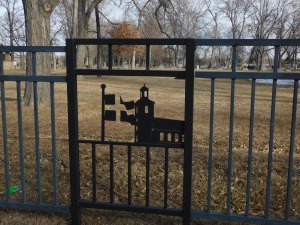 Finally, this panel.  It might be easy for you to see now, but it took me a minute to figure out what this was.  I thought to myself, “Why are they flying four flags instead of one?”  Then I saw where the artist cleverly used other elements to connect the Swedish flag maintaining the cross right there in the picture.  I thought that was genius!   He used the absence of metal to put the cross where it belonged!

Of course, as in many other places, there was a cemetery behind the church.

As I took this final look at the church, I took another picture to show the depth, the stonework, and the simple elegance of a church on a hill.  It has set there for well over 100 years.  Almost everything has changed.   What do you think? 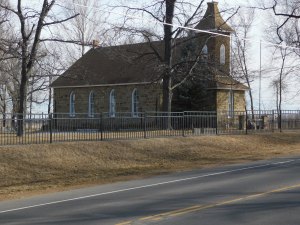 And THAT is when I heard it!   I heard a cry that sounded familiar, but I couldn’t connect it to what created it.  I decided that it had to have been a bird, though I wasn’t exactly sure.

Maybe if we begin to zoom in to find it.  As I did, it cried again, and I could see that this bird had made that noise. 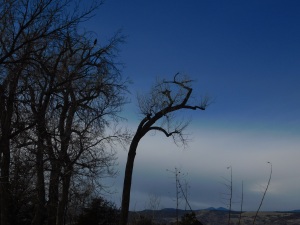 Maybe you can see it now.  That little dark blob in the top of a tree on the left.  Do you see it?

Now you should be able to find it.  When I got back home, I found that I inadvertently captured the images of TWO birds in this photo.

I estimated this was a LARGE bird, possibly 18 to 24 inches from top to bottom.  Eagle maybe?  I was thrilled.  So I zoomed in a little more!

The bird was preening itself.  Basically, it was ignoring me at this point.  But that changed, even though I estimated I was at least 100+ feet from being directly under its perch.

I put my camera in a digital zoom mode so I could get even closer.  Here is what I saw.

What a profile!!!!    It was now looking directly at me and I think it didn’t like what it was seeing. I was holding something and the bird did NOT want to stay around.  I made this picture just a few seconds before it flew off.

I think it was an eagle, a young bald eagle.  It still didn’t have its full color in, but I think it will have it by this time next year.  I was blessed!

I have a 4 second video now as it launched and I immediately lost it in my viewscreen!

It was a GREAT afternoon spent taking note and recording in photos portions of about a 3.5 mile stretch of a country road.  Many cars passed me.  I think they maybe noted a Church here, a cow over here, and some other kind of animal over there.  But by stopping for a few minutes, the land came alive! Sometimes, we all are in a hurry to be somewhere.  I hope we can stop, listen, and look to see what is really there.

Oh, and why did I pick this particular 3.5 mile stretch of road, because of these signs.  One was on the north end and the other on the south end of that piece of road.  My daughter used to work for that company, “A Spice of Life Catering”!  Thank You, Heather!  This is for YOU! 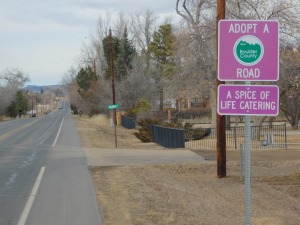